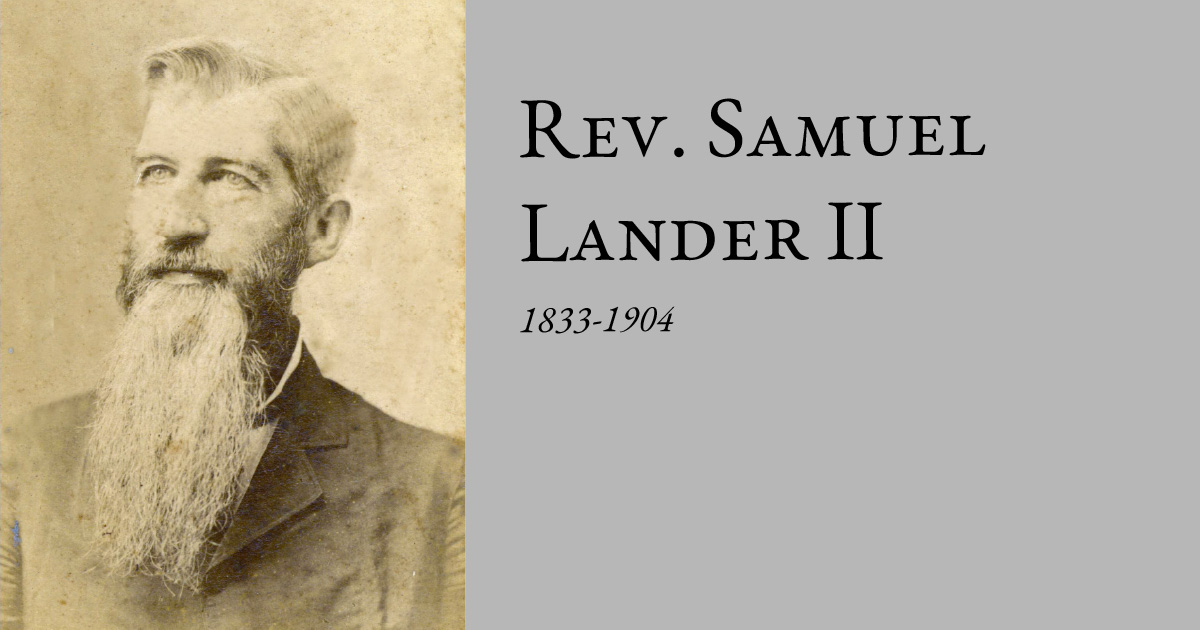 Samuel Lander was born in Lincolnton, NC, the second son of Rev. Samuel and Eliza Ann Lander. His father was a coach maker and Methodist preacher and both parents placed great importance on education from day one. In fact, young Samuel showed lots of early promise as a student, studying Greek and Latin before mastering English grammar. He was also gifted in mathematics and learned to play piano and guitar from his sisters. Lander moved to Lexington with his uncle, Rev. J. W. Murphy, before enrolling in Randolph-Macon College as a sophomore in 1849. Here the president of the college came to know Lander as “a first rate boy, and a first rate scholar” and wrote to his parents saying, “If you have any more of the same sort left, please send them on.” Lander would graduate at the top of class in 1852 before taking his first job as a road surveyor back in North Carolina.

On December 20, 1853, Samuel married Laura Ann McPherson who was also the daughter of a Methodist minister. It seems he was destined to become a minister himself, and after nearly 15 years of teaching and administrative positions at several institutions, Lander was licensed to preach by the Methodist Episcopal Church South. In 1871, the Methodist Church split the Carolinas and Samuel Lander moved to South Carolina. He taught one year at Spartanburg Female College but was appointed to move to Williamston where he would serve the Methodist Church.

Lander moved with his wife and children into the old resort hotel across from Williamston Spring Park. At this location Lander founded Williamston Female Academy on February 12, 1873. The purpose of the institution was to provide equality in education for women, so Samuel Lander emphasized merit and academic honesty. His approach to women’s education was considered pioneer in its day, especially his belief that both genders should have access to success but not without hard work. For his efforts, Lander received an honorary Doctor of Divinity from Trinity College which later became Duke University. He felt he did not deserve this degree unless he could read the Bible in its original languages, so he began learning Hebrew at the age of 45. By the end of his life, Lander was fluent in German, French, Italian, and Gaelic in addition to Greek, Latin, Hebrew, and, of course, English.

The City of Greenwood offered to build a new location for the college in 1903. Lander agreed and hired additional faculty to expand with the move. However, he died before the move was complete on July 14, 1904, and was buried in the Williamston Town Cemetery. The new college opened that September and was dubbed Lander College after its founder. The Methodist Church relinquished control of the college to Greenwood County in 1948, and became a state supported school in 1972. In 1992, the school became Lander University and carries on Samuel Landers’ tradition of training young people to be lifelong learners in an ever-changing world.