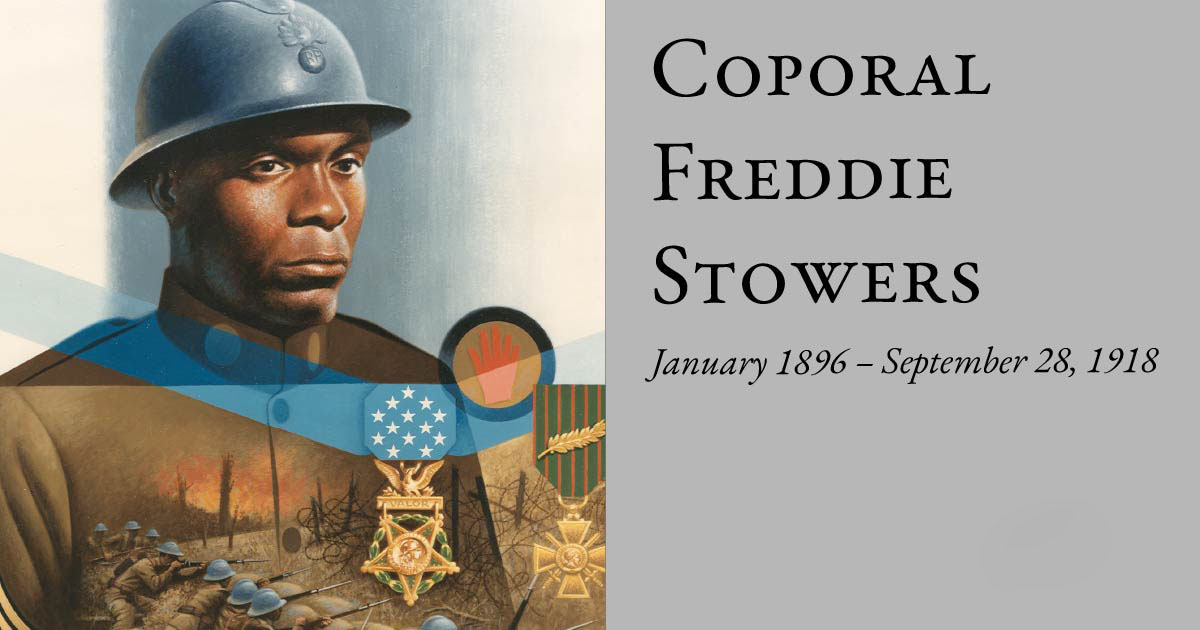 Freddie Stowers the grandson of a slave and one of two African –American recipients of the Medal of Honor in World War I. He grew up in Sandy Springs, one of twelve children of Wylie and Annie Stowers. At 21, already married and the father of one daughter, Stowers was drafted into the United States Army and sworn into service in Williamston on October 4, 1917. He served in the all-black 371st Infantry Regiment, 93rd Division at Camp (now Fort) Jackson, in Columbia. Within two months, he was promoted to private first class and by the spring of 1918, he was assigned to the American Expeditionary Force (AEF), sent to France and promoted to corporal.

Participating in the autumn AEF campaign that led to the Allied breakthrough of the German military line and to German surrender six weeks later, Corporal Stowers led his squad during some of the bloodiest fighting of the war, especially for African-American soldiers. Stowers was killed on September 28, 1918, while leading an assault on enemy trenches after the enemy seemed to surrender, drawing the Allied troops out the safety of their trenches. With the platoon leaders and over half of his company wounded or dead, Stowers, mortally wounded, continued to lead his troops forward until his death. Spurred on by Stowers’ courage, his troops continued the attack that led to heavy enemy casualties and the capture of Hill 188. Stowers was buried in the Meuse-Argonne American Cemetery in France.

Soon after the war, Stowers was recommended for the Distinguished Service Cross. In December 1918, his commanding officer upgraded the recommendation to the Medal of Honor. Unfortunately, no action was taken. In the mid-1980’s, an investigation into the lack of African-American Medal of Honor holders for World War I and II led researchers to find Stowers’ original recommendation. In 1991, when the award was finally made, a Pentagon spokesman called this an “administrative oversight”. President George H.W. Bush presented the Medal of Honor to Stowers’ surviving sisters during ceremonies at the White House on April 24, 1991.

There are no known photographs of Corporal Stowers.