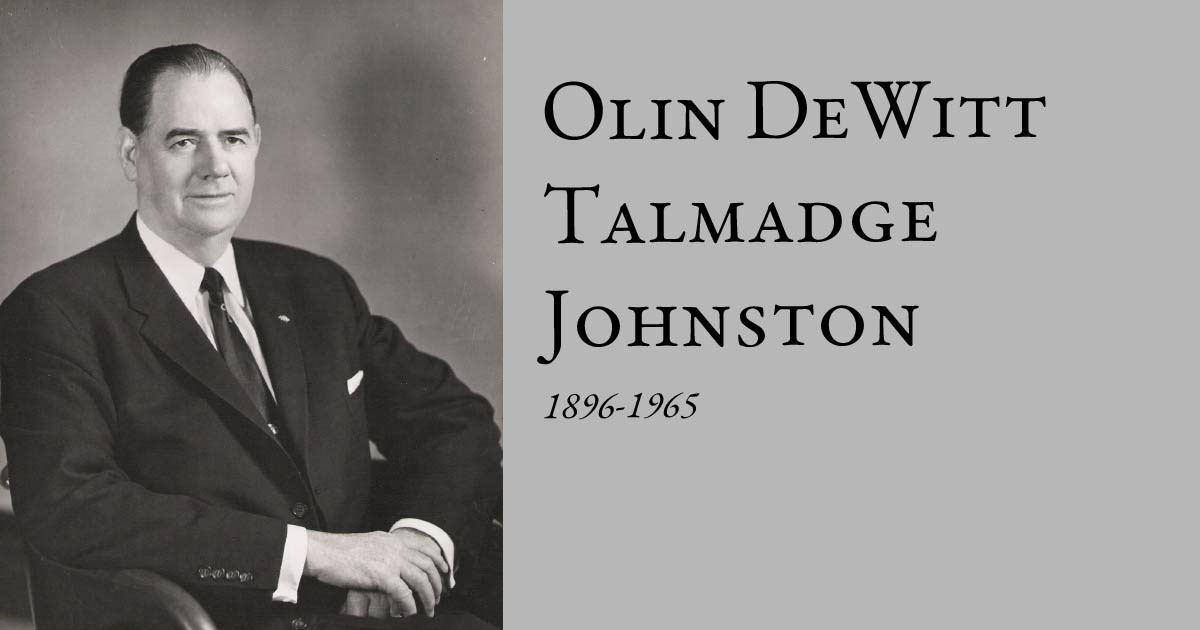 Born near Honea Path on November 18, 1896, Olin DeWitt Talmadge Johnston was the eldest of the eight children of E.A. and Leila Johnston. Beginning at the age of eleven he worked in the local textile mill to help support his family. He attended the Textile and Industrial Institute (now Spartanburg Methodist College) in 1915. While attending TII, he worked at a local textile mill to supplement his tuition. Mr. Johnston attended Wofford College until 1917, when he enlisted in the United States Army. He received a regimental citation upon his discharge in June 1919. He returned to Wofford College and graduated in 1921.

In 1923 Johnston earned a graduate degree in Rural Social Science from USC. He earned his law degree from USC in 1924. As a student, he was an active debate team member and a leader in the campus YMCA programs.

Mr. Johnston’s political career began in 1923, when he was elected to represent Anderson County in the SC House. After establishing his law practice in Spartanburg he represented Spartanburg County in the House from 1927-30. An unsuccessful candidate for the gubernatorial nomination in 1930 and for the Democratic nomination for the United States Senate in 1938 and 1941, he was Governor of South Carolina form 1935-1939 and from 1943 until his election to the United States Senate in 1944. Subsequently elected US Senator in 1950, 1956 and again in 1962, Sen. Johnston served in the US Senate until his death on April 18, 1965.

Senator Olin D. Johnston was a strong advocate for textile mill workers. He supported tax exemptions for small homeowners and farmers, increased in the minimum wage, and a forty-hour workweek. As governor, he created the first workers’ compensation plan and achieved a seven-month state-financed school term, providing better education for the working class. A strong supporter of President Franklin D. Roosevelt, Sen. Johnston was instrumental in the establishment of the Rural Electrification Authority, which brought lights to SC farm families.