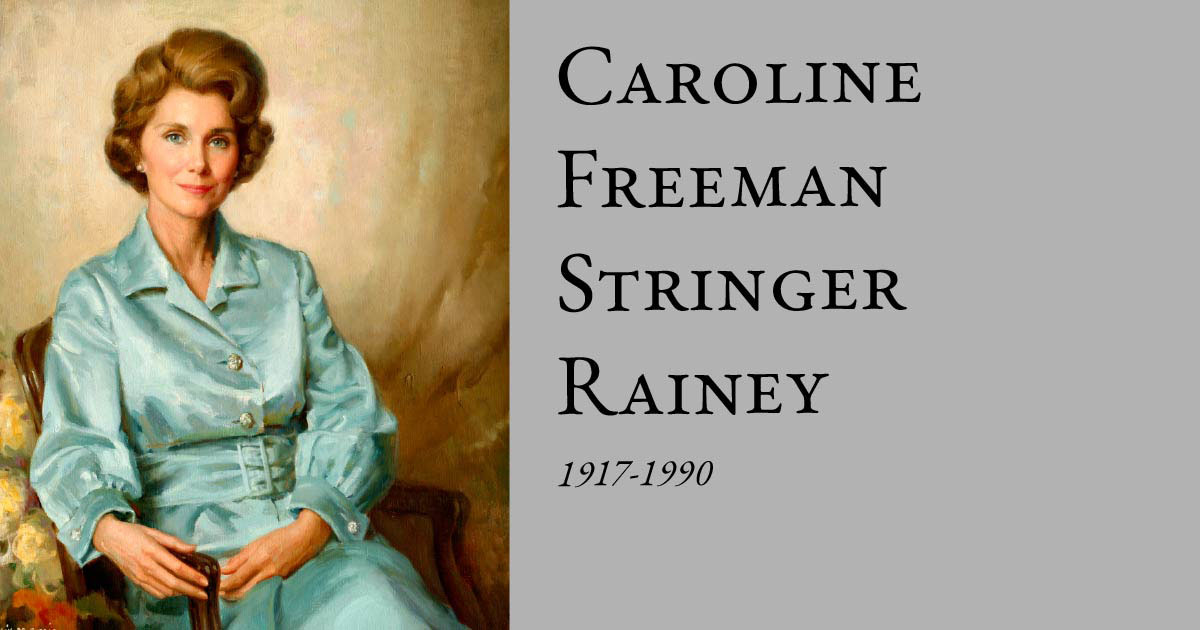 Caroline “Callie” Freeman Stringer Rainey was born in 1917 in Belton, South Carolina, the daughter of Nancy Clare Freeman and William Kenneth Stringer. During her childhood, the Stringer family moved to Anderson. She attended the public schools in Anderson, Converse College in Spartanburg, and graduated from Randolph-Macon Woman’s College in Lynchburg, Virginia in 1937. She married John Faulkner Rainey, M.D. in 1939.

Mrs. Rainey was active in both civic and cultural affairs in Anderson County and throughout the state of South Carolina. At the time of her death, she was a trustee of the South Carolina State Museum. She considered her active role in the acquisition of artifacts and her contribution of time and treasure to the museum as one of her major accomplishments. She was also the chairman of the Board of Trustees of the Stringer Foundation of Anderson, a member of the Board of Trustees of the Lipscomb Family Foundation of Columbia, and a member of the Governor’s Mansion Foundation. Dr. and Mrs. Rainey funded the establishment of The Rainey Chair in Pediatric Hematology at The Johns Hopkins University School of Medicine.

Mrs. Rainey was one of the moving forces to preserve the historic buildings in Anderson. Through her efforts, the Carnegie Library building was saved, and she was instrumental in the establishment of the Anderson County Arts Center within this historic structure. She was a founding member of the Anderson County Woman’s Club and Anderson Heritage. She was involved in the designation of the Anderson Historic District and helped save the Caldwell-Johnson-Morris House and the Christopher Orr Tavern. Mrs. Rainey received posthumously the Converse College 1991 Distinguished Alumna Award. In 1992, she was awarded posthumously the Order of the Palmetto by Governor Carroll A. Campbell, Jr.

Mrs. Rainey was also an astute businesswoman. She served on the Anderson Advisory Board of Directors of the Citizens and Southern National Bank from 1975 to 1987, serving as its chairman in 1976 and 1977. Mrs. Rainey was an active officer and director of the Kenneth Cotton Mills of Walhalla, South Carolina, which was founded by her father. She oversaw the diversification of the family business into a Pepsi-Cola bottling operation in the 1960’s. Mrs. Rainey was a life-long member of St. John’s United Methodist Church and served on its Administrative Board and Board of Trustees.