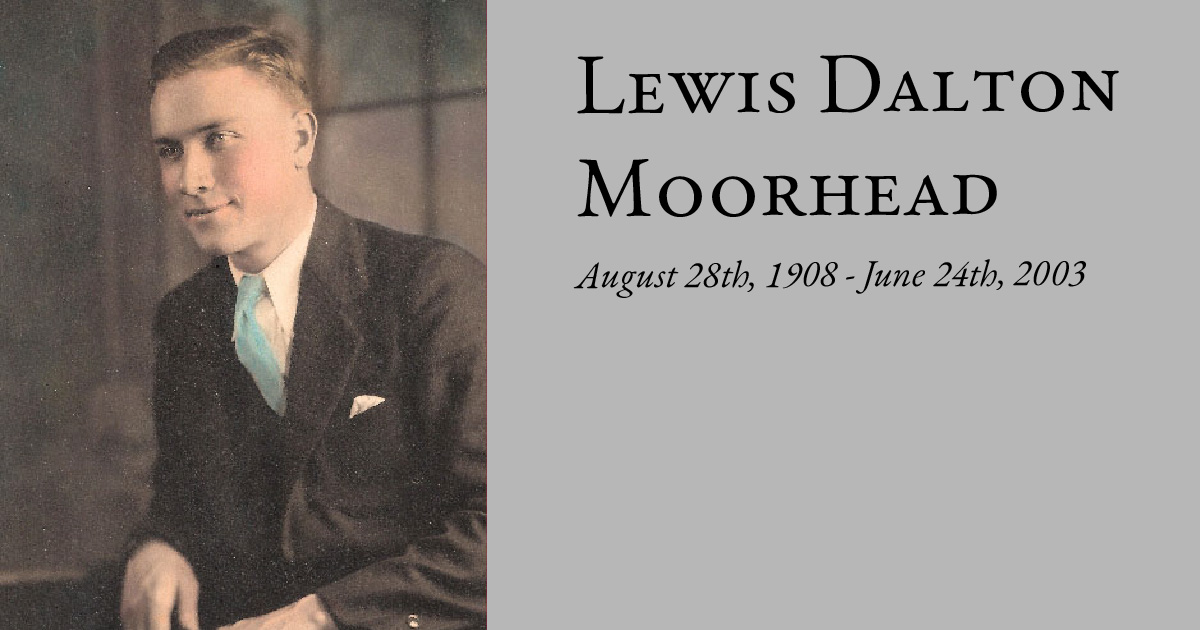 Born August 28th, 1908 to Augustus and Nora Moorhead, Lewis Dalton Moorhead was destined to become “Anderson’s Premier Photographer” of the 20th Century. Born and raised in Sandy Springs, Moorhead attended Clemson College in the 1920’s where he took many Bible and religious courses. He graduated from Clemson in 1930 and began work at LaFrance mill.

Upon being laid off from the mill later in 1930, he found himself walking on North Main Street and ran into a long line of people waiting to take “penny” pictures at a local photography studio. He later said that, at that moment “I thought I had better get into the picture business.” He joined John Green’s studio which had been operating in Anderson since 1892. He worked for Mr. Green for “a dollar a day and dinner.”

After his initial training Moorhead worked for Mr. Green, taking pictures of many local events such as weddings and civic engagements. Among the most notable was when Amelia Earhart landed at what was then the Anderson Airport on November 14th, 1931 as part of her thirteen-state, Beech-Nut Gum promotional tour. Earhart stayed in town only for a few hours but before departing she posed with several of Anderson’s civic leaders for a photo taken by Moorhead. December 15th, 1934, he married his wife Blanche Saylors, who would prove to be a key to his success as a partner in life and in business.

In his time, Moorhead was an extremely prolific photographer, taking photos for Franklin Roosevelt’s WPA and in 1938 had his “Five Way Crossing at Three & Twenty Creek” published by Robert Ripley’s Believe it or Not. With the coming of World War II, Moorhead enlisted in the Army Air Corps at the age of 34. He joined a photography unit in August of 1942 and served in the military until the war ended in 1945.

In 1946 he opened his own studio on Power Street and immediately found recognition for his photography. He won the SC Research, Planning & Development Board photo contest for his photo of a snowy Fort Hill. Moorhead also took photos for the Anderson Daily Mail and Independent, judged its Amateur Snap Shot contest, and contributed editorials. He also photographed crime scenes, car crashes, and autopsies for local law enforcement. His pieces graced the front of The State magazine and The Farm & Ranch in the 1950’s.

Moorhead joined the Anderson Chamber of Commerce Board of Directors in 1954, and was a lifelong member of the Professional Photographers of America, Inc., the American Legion Post 14, a charter member of the Anderson Lion’s Club, and the Lebanon Baptist Church where he was a Deacon and Bible Teacher. Lewis Moorhead, together with his wife Blanche, ran the studio on Power Street until his death on June 24th, 2003, leaving behind a legacy and history of Anderson on film.