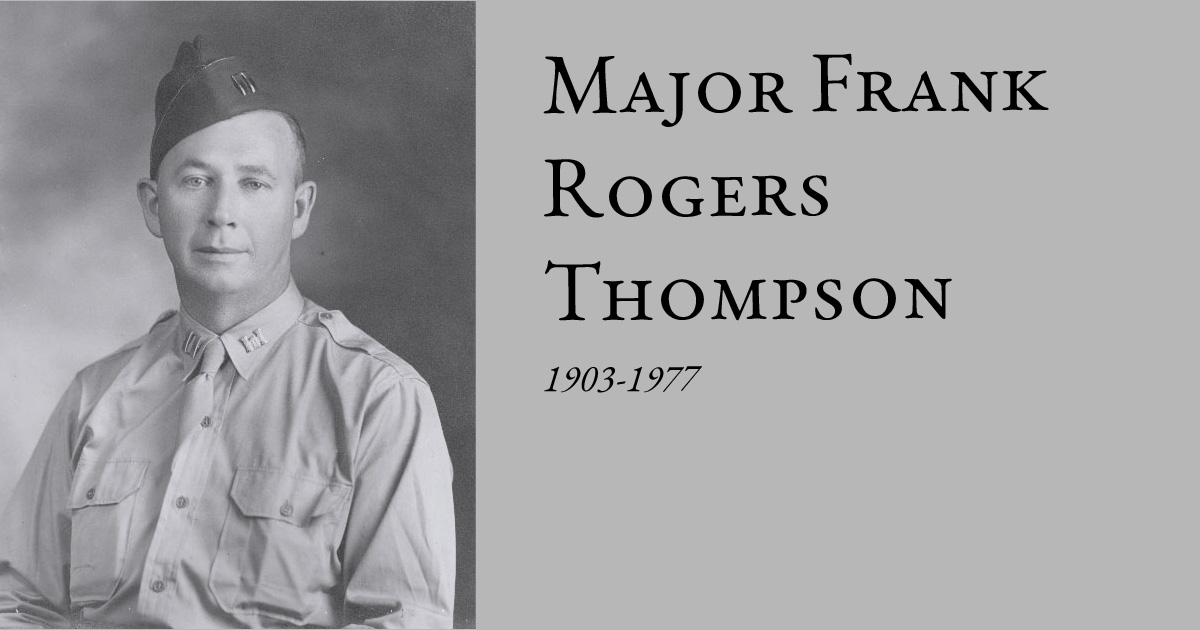 Major Frank Rogers Thompson was born in Concord, North Carolina on June 15, 1903. As a teenager he attended North Carolina College and Porter Military Academy in Charleston where he earned a Civil and Mechanical Engineering degree. He also worked as a cadet at the U.S. Army Supply Base in Charleston. It was here he took up boxing and actually became a welterweight champion during WWI.

Frank Thompson’s intelligence, integrity, and initiative helped him gain rank until he would eventually serve as a commissioned officer of the U.S. Army Corps of Engineers during the Second World War. He traveled to North Africa and Europe as a member of Task Force “A” advanced echelon with General George S. Patton, Jr. and General Arthur Wilson. Thompson planned and oversaw the construction of the first trenches in the port area of Casablanca after the North Africa invasion. For this achievement and his outstanding service in the Tunisian, Italian, and Balkan campaigns, Frank Thompson was awarded the Bronze Star in 1945.

In 1930, Mr. Thompson had founded the Anderson Petroleum Company and constructed the plant on Glenn Street along with several service stations. He passionately cared for his employees and servicers. In one instance, a competing company’s representative harassed one of Frank’s station managers and refused to leave, that is, until Thompson blackened the man’s eye. His contributions to Anderson’s economy also included hangers provided for the County Airport and support during crucial periods of the facility’s growth. Perhaps most famously, Thompson flew to Washington to assist the Corps of Engineers in the planning of the Hartwell Dam Project. He remained a vehement defender of the lake through the rest of life, recognizing the economic potential it represented for Anderson County and the Upstate.

Thompson was always a visible member of the community serving as Vice Chairman of the Blue Ridge Council of Boy Scouts, Director of the Anderson County Tuberculosis Association, member of Anderson’s Chapter of the Crippled Children of S.C., Advisory Board member of the Anderson Salvation Army, and general committee member for the American Red Cross. He also served as a Boy Scout Leader and was a charter member and president of the Anderson Kiwanis Club. All these contributions were balanced with his involvement with the local AMF, VFW, Hiram Lodge No. 68, and membership at Central Presbyterian Church.

Thompson passed away in 1977 from a sudden illness. He always lived his life by his motto: “help every needy person from the humblest class up.” His personal sacrifice and uncommon leadership helped to shape our county, state, and nation.