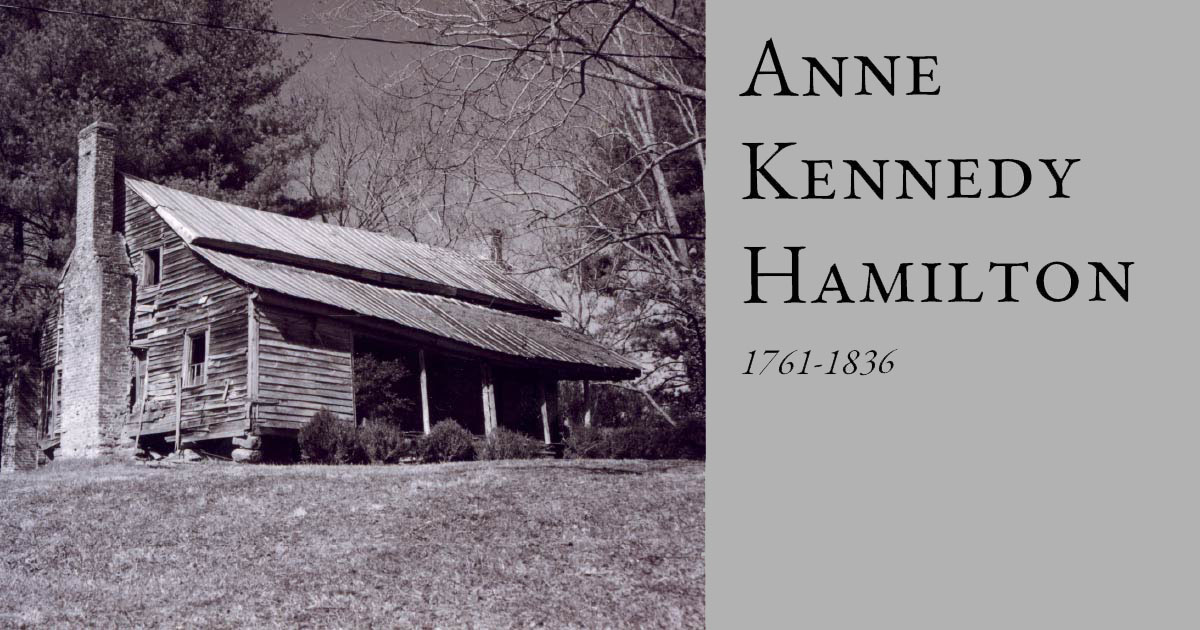 Revolutionary War heroine Anne Kennedy was hailed for her bravery and patriotism. Born in Browns Creek, Union County, South Carolina, Kennedy lived in her father's household during the war years. Young Anne was said to have informed American Commanders of British plans and troop strength in spite of the eminent threat of raiding Tories.

In November of 1780, these loyalists invaded the Kennedy home looking for Anne’s father and brothers. Anne’s cousin, who had been severely wounded in the recent battle of the Black Stocks, was the only man they found. The enemy force assumed he would die of his injuries and decided not to kill him. However, they did plunder the house, taking jewelry, tearing up featherbeds, and even stealing the bedclothes. Anne’s mother hoped to save the last blanket by sitting on it, but one of the men seized it anyway.

Anne lost her temper. She grabbed him by the arm and literally kicked him out the door. The soldier turned to shoot but his captain intervened saying she was too brave a woman to kill. Still fuming, the soldier attempted to burn the house down with a flaming stick from the fireplace. Anne expelled him again before he hurled the fiery log at her, horribly breaking and burning her hand. After the conflict, the family moved Cousin William to the woods in fear of another raid. Anne nursed him to health in a makeshift shelter over several weeks, though her hand would be crippled permanently.

Local ladies composed a message to General Morgan in Pacolet Springs which called for protection from such raids. With no men available to deliver it, Anne volunteered to ride horseback some sixty miles allegedly hiding the note in her stocking.

On Christmas Day of 1782 Anne Kennedy married Thomas Hamilton, a Revolutionary War veteran with whom she would have twelve children. Among the early settlers, they built a house on land granted by the state in what became the Pendleton District, and later Anderson County. Well-known and active in their new community, the couple helped found Carmel Presbyterian Church where Thomas served as an elder for over fifty years. Anne Kennedy Hamilton died March 24, 1836, and was buried in a family cemetery near Carmel Church.  Thomas died May 2, 1856, and lies in the Carmel Church cemetery. Their original home was recently disassembled and placed in storage, where it awaits reconstruction.