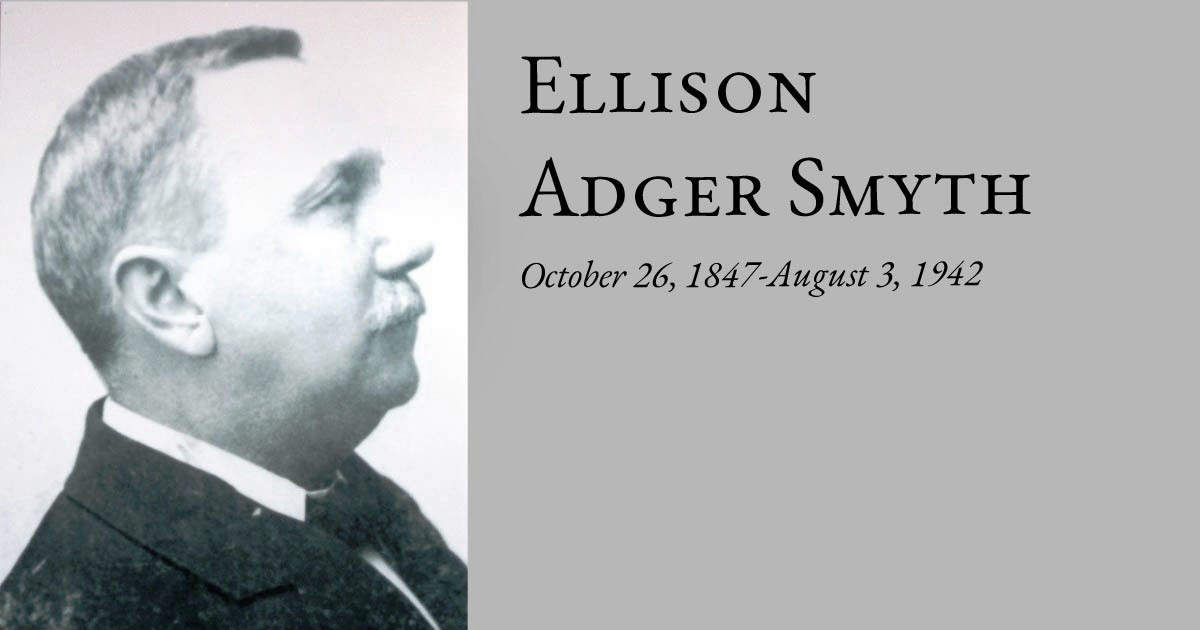 A native of Charleston, Ellison Adger Smyth, along with four other businessmen, with the capital of Mr. Francis J. Pelzer, obtained a charter of incorporation from the state of South Carolina in 1881 for Pelzer Manufacturing Company. Smyth was chosen as president of this new company that began construction of a cotton mill in Anderson County. It was there that the town of Pelzer was born. In the mill’s first thirteen years of existence, the community grew to over 4,000 people, with 700 houses, three churches and numerous other buildings being erected. The Pelzer Manufacturing Company featured one of the largest cotton mills in the world under a single roof. In the years to come, Smyth served as president of several businesses including the Chicora Savings Bank, Belton Mill and Anderson Phosphate and Oil Company. He also served as a director in more than forty other corporations. In 1906, upon its organization, he was elected president of the Cotton Manufacturers Association of South Carolina. He served as a presidential appointee to the United States Industrial Commission.

Mill No. 4 of the Pelzer Manufacturing Company, completed in 1895, was the first manufacturing facility in the United States to be operated with electricity that was generated at a distance. Smyth had the mill built close to the village and the railroad, but not close to the river. Power then had to be sent approximately three miles from the electrical power station downstream at Holland Shoals.

Seeking to make Pelzer a model mill town, the company had its own rules of behavior and employed constables in the community to enforce them. Smyth was a leader in requiring compulsory education in Pelzer in 1902, a practice that did not become state law for another fifteen years. The schools, run by the company, were open ten months a year and were free to all children of Pelzer. It is believed that the first kindergarten in Anderson County was started in Pelzer in 1899, in addition to a night school for adults. Smyth also donated a 3,000-volume library to the community, open after work and on Sundays for the workers. He oversaw the construction of a gymnasium, a swimming pool, a park with a zoo, a golf course and a hospital. His company was a pioneer in welfare work, erecting and supporting six church buildings in the community. Smyth lived in Pelzer until moving to Greenville, but continued to commute to Pelzer daily. In 1899, he bought an estate in Flat Rock, North Carolina, and named it Connemara. It was here that he spent weekends and summers until retiring in 1924. Smyth lived there until his death in 1942, at which time Connemara was purchased by renowned poet, Carl Sandburg. It is now a national historic park.