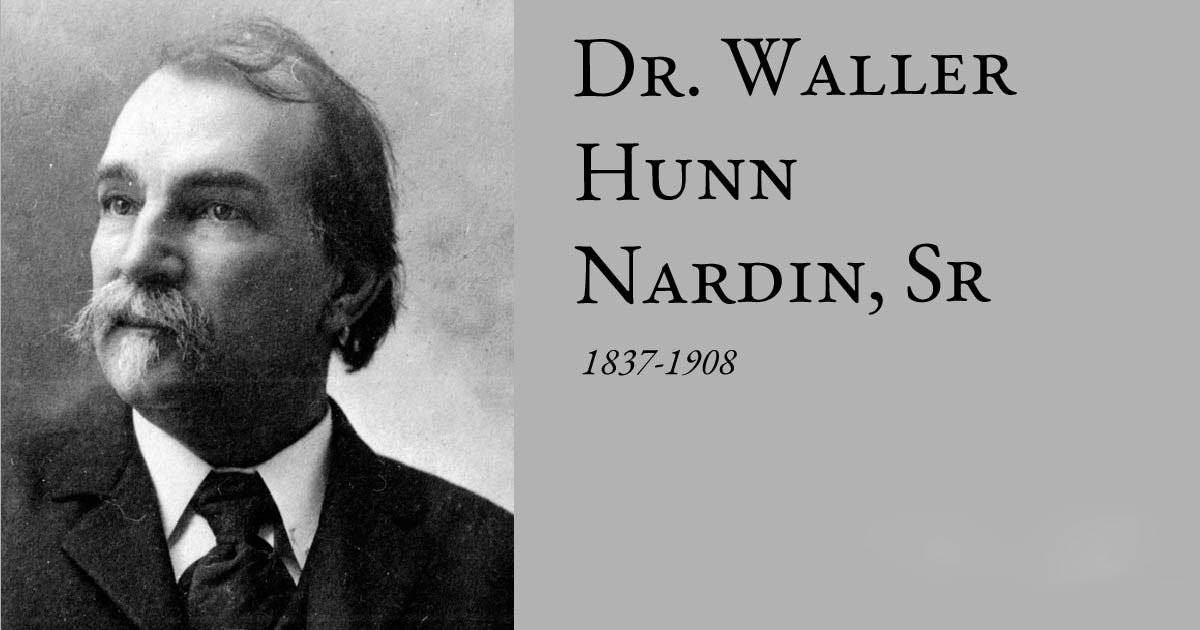 Waller Hunn Nardin, Sr. was born in Charleston, SC the son of Dr. David Frederick Nardin and Eleanor Waller. He spent most of his life in Anderson as a respected family doctor and businessman devoted to this community. His father sent his wife and one-year-old son to the Anderson area to escape the Yellow Fever Epidemic of 1838, but lost his own life to the disease. The young widowed mother remained in the Upcountry and later married Daniel Brown, a prominent Andersonian.

The young Waller Nardin graduated from the medical school of the University of the City of New York in 1860 and returned to Anderson to set up his medical practice. The Civil War temporarily changed the focus of his work. He first served locally by treating a smallpox outbreak in the Fork Township area, which had been caused by infected soldiers coming home on furlough. He then worked at the Confederate Hospital in Columbia, SC as an assistant surgeon of the 25th South Carolina Volunteers, and finished his war service with the 65th Georgia Regiment.

In 1865, Dr. Nardin returned to his Anderson home where he resumed his practice, at the same time partnering with his stepfather in the mercantile business. In 1875, he withdrew from the business to concentrate on his increasingly successful medical career. He served as a member of the State Board of Health, the State Board of Medical Examiners, president of both the Anderson County Medical Society and SC Medical Association, and delegate to the American Medical Association. He was deeply involved with the planning and building of Anderson’s first hospital where he was an original staff member.

Nardin’s accomplishments in the medical field were well thought of by his peers. The March 1992 issue of The Journal of the South Carolina Medical Association featured as its cover story an account of Dr. Nardin’s successful treatment of a case of traumatic epilepsy through cerebral surgery in 1896.

Dr. Nardin remained involved in business and civic enterprises in Anderson as a stockholder and director in the city’s first cotton mill, bank, oil mill, and the Patrick Military Institute. Having previously served as city alderman, he was in office as Intendent in 1882 when he helped obtain the city’s incorporation from the state legislature and finished the year as Anderson’s first mayor.