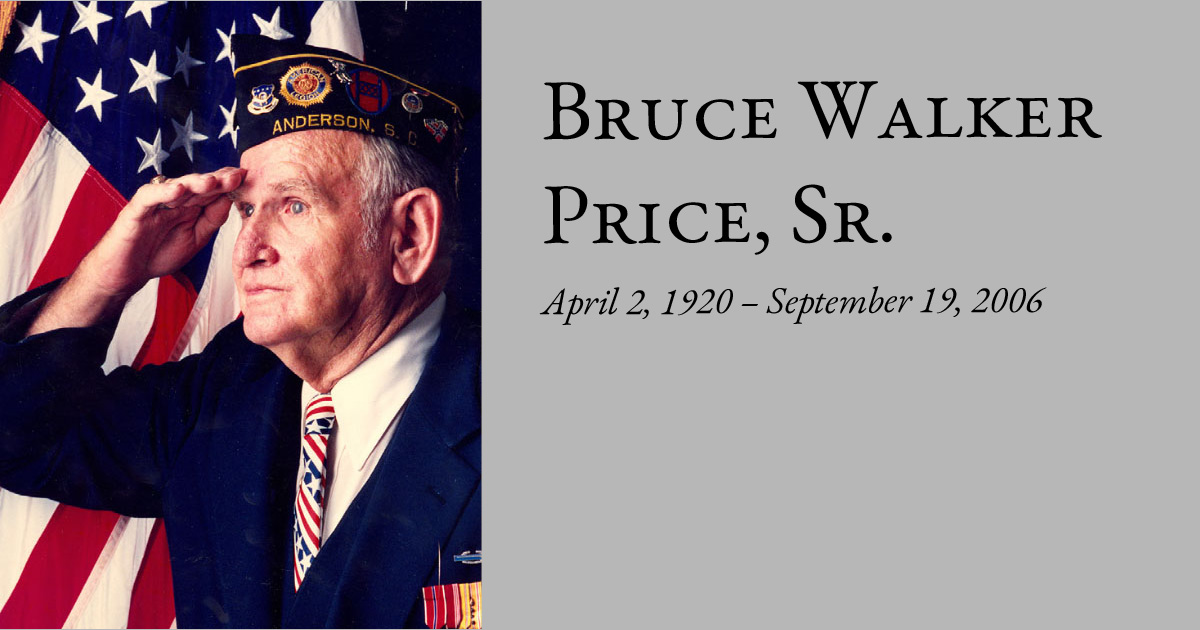 Bruce W. Price, Sr. led a full and selfless life. Born in Union, SC, Bruce’s father Charles S. Walker was a track supervisor for the Southern Railroad and his mother Zelda Goode Walker died when he was only 11 months old. He came into the care of a foster couple, Austin and Mae Price, while his father secured living situations for the older siblings. From then on, he was raised by the Prices.

Bruce graduated from Union County High School in 1938. He knew he had to join the military when news of the war in Europe began to hit the papers. Price served 5 years in the US Army from 1940 through 1945, first in Companies E and H, 118th Regiment, 30th Division at Fort Jackson, SC and Camp Wolters, TX. After graduating from Officer Candidate School, he received his commission as 2nd Lieutenant and transferred to Fort McClellan, AL and then was sent on to Schofield Barracks, Hawaii, where he was assigned to the 19th Infantry Regiment, 24th Division, Co. C. Price took part in a number of Pacific campaigns during the Second World War, notably taking Hill 522 during the Philippine Leyte Invasion. Major General F.A. Irving stated that had the hill not been taken when it was “we might have suffered a thousand casualties in the assault,” staggering in comparison to the fourteen casualties that did occur. The effort of Price and his compatriots helped to liberate the Philippine Islands from the Japanese and pushed the Allies toward victory in the Pacific.

Following the war Bruce returned to Union and married Ruth Elizabeth Dickerson in 1945. They moved to Abbeville 5 months after their daughter Ann was born, but settled in Anderson where their son Bruce Walker Price, Jr was born in 1950. Price had begun work with Procter & Gamble, where he proved an excellent and fair salesman. He would eventually retire after 32 years of dedicated service. Price also helped to mold young leaders in Anderson as a troop leader for Boy Scout Troop 96, many of whom achieved the status of Eagle Scout.

As a civic leader here in Anderson, Bruce invested himself in preserving the county’s history as well as improving its future. He served as President of the Anderson County Historical Society (and as the District One Representative of the Confederation of SC Local Historical Societies), President of the Gen. Andrew Pickens Chapter of the Sons of the American Revolution, Commander of the Palmetto Sharpshooters Camp of the Sons of Confederate Veterans, and was a charter member of the Anderson County Museum. Price remained one of the ACM’s most dedicated advocates and volunteers, and helped to arrange several important donations like our WWI Field Kitchen. He gave yet more time to various organizations for the betterment of Veterans and served as a Commander and historian for Anderson’s W.A. Hudgens American Legion Post #14.