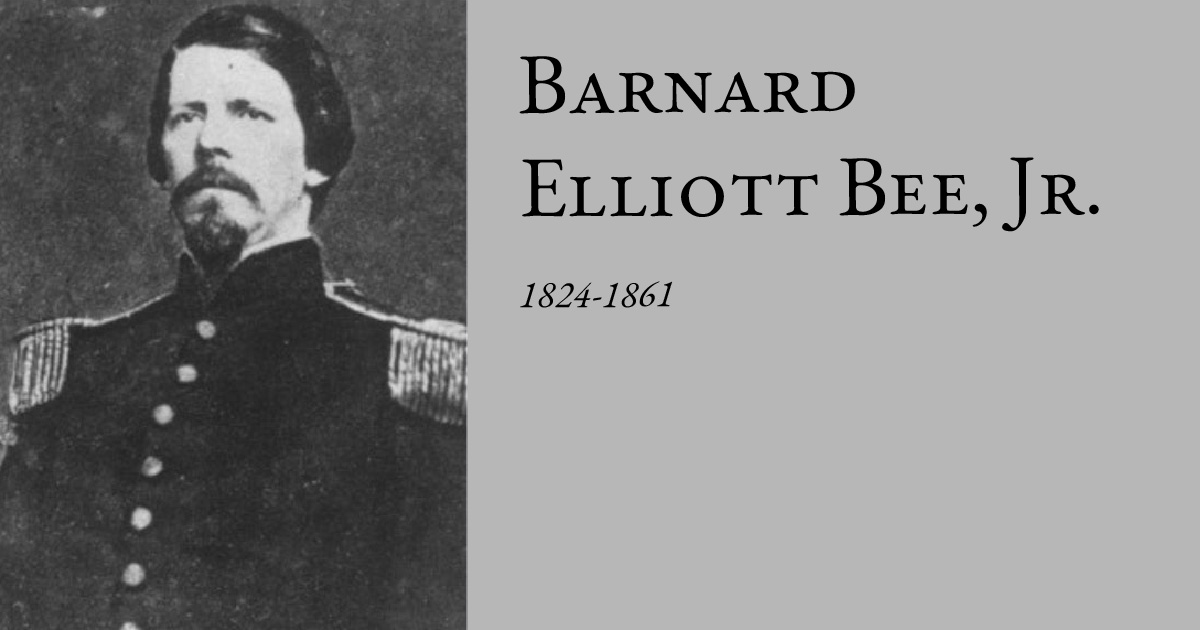 Confederate General Barnard Elliott Bee, Jr., was born in Charleston, SC on February 8, 1824. His grandfather Thomas Bee (1739-1812) served as delegate to the Continental Congress. The family moved to Pendleton in 1833 when Bee was nine years old. When his parent moved to Texas in 1836, the young man remained in Pendleton where he attended the Pendleton Academy. Eager for a military career, he was appointed a cadet at West Point and graduated in 1845.

Bee’s first posting was to Texas, where he distinguished himself during the battles of the Mexican War. With the coming of the Civil War, he resigned his military commission on March 3, 1861.

On June 17, 1861, Bee was promoted to Brigadier General in command of the Third Brigade of the Army of the Shenandoah. During the fierce combat of the Battle of First Manassas on July 21, Bee’s troops were forced back and the ranks began to break. Bee rallied his troops successfully by pointing to nearby General Thomas Jackson and his men shouted, “There stands Jackson like a stone wall. Rally around the Virginians.” General Jackson was known thereafter as “Stonewall Jackson.”

General Bee’s excellent military career was sadly ended that day, for he was mortally wounded soon after making his famous exclamation. He died the next day, July 22, 1861, in the house he had used as his headquarters during the battle. The thirty-seven year old Bee was given a hero’s funeral in Charleston and buried at Magnolia Cemetery. His body was moved to the family plot at St. Paul’s Episcopal Church in Pendleton in March 1863. A South Carolina historical marker honoring General Bee is located at the edge of the church yard. On July 21, 1939, a monument honoring Bee was placed at the Manassas Battlefield.